This year will mark the 47th consecutive year of the International Brangus Show in Houston, Texas, where showman, cattlemen, producers and cattle enthusiasts from all over the world will gather to marvel at the best show cattle in the breed. Almost 50 years of tradition and fellowship follow the Brangus activities in Houston. This feature highlights a great showman and Brangus producer and was initially published in the January 2013 issue of the Brangus Journal.

Myron Saathoff enters the show ring grasping a lead rope in one hand and a show stick in the other trailing a line of perfectly fitted Brangus heifers. At the other end of the halter, Pearl glides alongside Saathoff following his directions. After getting set, Saathoff anxiously awaits the judge’s selection, knowing his heifer is bound to receive the prized purple banner.

Saathoff has stepped foot into many show rings over the last 40 years and is no stranger to the winner’s circle. He initially began showing heifers and steers in high school through FFA while growing up in Hondo, Texas. Now after two back surgeries, one hip replacement, and countless ribbons and awards won, Saathoff is unsure of how many more times he will be able to return to the show ring.

The earlier account was one of the most memorable moments of Saathoff’s show career. Pearl was the offspring of a champion that Saathoff bred and raised at JLS, Pearl’s dam, Tally, was awarded Show Heifer of the Year in 2003-2004, winning three of four major shows that year. Pearl was named International Champion and Show Heifer of the Year in 2009. The very next year, Tally had another daughter, Kelly, who was also an International Champion.

Upon graduating from high school, Saathoff attended Texas Lutheran College in Seguin, Texas, on a baseball and football scholarship and finished at Texas State University in San Marcos, Texas. He then began working at the local auction barn where his father worked before transitioning to the ranch management sector. He first worked for Larry Blackman of B2B Farms at 20 years old. He got involved in showing again this time in open shows. It was at B2B farms that Saathoff used Big Sir 75/6 and Justana 40/8 as clean up bulls, two of the Brangus foundation sires of today. Big Sir was the grand sire of Titan, who was the sire of Transformer, Big Sir also sired General, one of the maternal foundation sires of the breed. Justana was the foundation sire of Robert Vineyard’s 100 family. Both of these bulls can be found somewhere in most pedigrees popular today.

After working for B2B Farms, Saathoff managed several other operations including Escoba, T Diamond, Star J Ranch, and Star Creek Ranch owned by Curly Taylor where all the Brinks 392 progeny was developed. Saathoff tried his hand in sale management and consulting before settling in at JLS International owned by Jeff Smtih located near Devine, Texas. Now almost 13 years later, Smith and Saathoff together have more than 70 years of experience in the Brangus seedstock business.

Saathoff has built an outstanding reputation breeding numerous champion heifers and bulls. To date, JLS is the only operation to win the Futurity three times. JLS was also recognized as the IBBA Breeder of the Year in 2007, and Saathoff has been honored as Herdsman of the Year twice. However, Saathoff still has goals for the operation and feels like he still has more to learn.

“I’m still going. Nobody has produced a perfect animal yet, but we’re getting closer,” Saathoff said. “Show animals and breeding stock are becoming more similar and are looking more alike than they did several years ago.”

With approximately 550 head of cattle plus bulls and heifers, JLS is still expanding and trying new techniques. Having obtained the most desirable cattle and some of the best performance cattle in the industry, Saathoff’s primary goal now is to improve genetic consistency in the registered herd. In order to achieve that goal, JLS recently generated five cloned heifer calves from the original 915C cow. Saathoff said the only way to tell them apart is by their ear tag number, and they even came into heat within three days of each other without using synchronization. Saathoff attributes the 915C cow for contributing to the success JLS has experienced over the last 13 years with last year marking 115 descendants from the 915 family.

JLS is also expanding their operation to include red Brangus cattle and now have seven red Brangus females. Saathoff showcased their red Brangus program in the show ring last year and received Red Brangus Show Heifer of the Year. JLS has implemented a breeding up to Brangus program in order to introduce new genetics and avoid line breeding. When it comes to genetic selection, Saathoff knows what to look for, and the success JLS has had is a testament to the extensive knowledge and experience he has gained.

When selecting cattle and making breeding decisions, Saathoff’s number one priority is performance. He wants a bull that can work in the South Texas climate and tough, rugged environment, which is the ultimate reason why he likes the Brangus breed.

“I’ve had experience with Angus, Brangus, Braunvieh, and from experience, Brangus by far out did everything as far as adaptability,” Saathoff said. “Brangus were the most fertile and had the best performance and best milking ability across the board.”

Saathoff said infusing Brangus into a herd will improve milking ability and mothering ability, and he compliments the Brangus female for being the best in the industry. He believes Brangus can improve the beef industry with the breed’s tremendous adaptability qualities as long as purebred breeders produce bulls the commercial man needs and can use. The biggest challenge Brangus breeders face involves marketing.

“They need to believe in the product they are producing and market their own product,” Saathoff said. “If you believe in what you have and are knowledgeable about your program, you can sell it.” 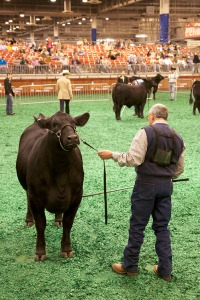 Saathoff said it was important for the Brangus breed to obtain more accurate data and genetic markers in order to improve consistency within the breed, but also to improve the market and increase the demand for Brangus cattle. With the constant change in marketing trends, Saathoff is still trying to learn new tricks.

Saathoff said he follows examples by others who were successful marketers like Glen Brinkman and Joe Reznicek, who were both very involved and knowledgeable about their respective programs, but the Internet is a marketing tool breeders can easily take advantage of. It is accessible to everyone from businessmen to cattlemen, and all it takes is getting the information out there to the people who are looking for it, and Saathoff is one who continually looks for opportunities to keep growing.

“If you’ve got the information in front of them, you’ve got a better chance of selling them something,” Saathoff said. “Like live Internet auctions are an area that we can grow in, and it’s beneficial because people can view and buy cattle without travelling.”

Saathoff’s new goal for JLS is simple- to keep improving by increasing consistency. Maybe Saathoff is slowing down, but he is not done yet. He and his wife, Neva, are supporters of the junior association, IJBBA, and Saathoff said he enjoys watching juniors show his cattle as much as he liked showing. He likes the opportunity to give youth the experience they might not otherwise have been able to enjoy. Having two children who grew up involved in the IJBBA, Tanessa Sawyer and Tate, Saathoff knows how beneficial the youth organization is.

After 41 years in the cattle industry, Saathoff knows how to seek out and take advantage of the opportunities before him. He has made a name in this business and created a reputation built on integrity, and his reputation alone is what markets his cattle, selling close to 200 bulls on the ranch each year.

“Honesty is what has made JLS successful,” Saathoff said, “and everyone is treated the same regardless of experience in the breed or business.”

Among a library full of memories made in the show ring, Saathoff recalls another memorable moment in 2004 when the National Western Show was first hosted in Phoenix, Ariz. That year, JLS brought back both big prizes of Grand Champion Heifer and Grand Champion Bull. Another outstanding memory was in 2003 when JLS won Grand Champion Heifer at the Futurity for the third time by the same breeder. This third win allowed Saathoff to be the first person to take home the Brangus Futurity trophy engraved with all the past Futurity winners. This trophy had previously been displayed at the IBBA office and is now proudly displayed at JLS.

Saathoff is a true cattleman and showman!

Tell us what you think. Cancel reply