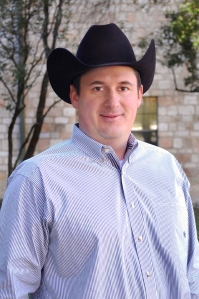 SAN ANTONIO, TX- Jason Bates representing the International Brangus Breeders Association (IBBA) was elected first vice president of the Texas Purebred Cattle Alliance (TPCA). The TPCA was organized to form an alliance of all purebred breeders and purebred associations to promote and protect the seedstock cattle industry in the State of Texas and to improve production techniques and the conditions of persons engaged in the purebred cattle industry.

“I look forward to working with this progressive group,” said Bates, IBBA’s Director of Field Services and Commercial Marketing. “As a representative of purebred breeders, I welcome your feedback and ideas on how we can advance purebred beef cattle.”

The TPCA promotes marketing ideas, international and domestic trade, and encourages better communication among the purebred cattle breeders and their associations. The TPCA works closely with the Texas Animal Health Commission, the Texas Department of Agriculture, the United States Department of Agriculture and their representatives on animal health issues and marketing seedstock cattle. The TPCA also cooperates with the Texas Beef Council, United States Beef Breeds Council and the American Dairy Council in efforts to improve the purebred cattle industry. 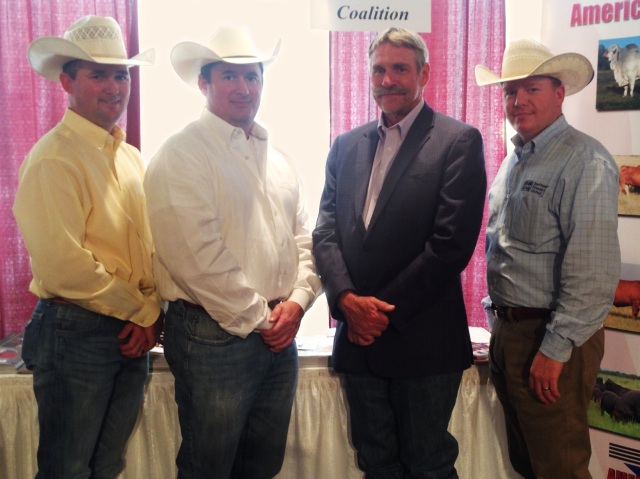 “We are excited to have Forrest Roberts address members and provide his insight to the beef industry,” said Tommy Perkins, Ph.D., IBBA Executive Vice President. “We look forward to hosting our members here at the IBBA headquarters and hearing their input. Their participation is vital to our progress.”

Member participation is welcomed for imperative planning meetings. Discussion of pressing topics will lead to advancements integral in the upcoming year and for years to come. As representatives of the IBBA membership and the Brangus community, your input and thoughts will be important to the dialogue.

The fall Board of Directors and committee meetings will be hosted at the Drury Inn and Suites near La Cantera Parkway (15806 IH-10 West) located across Loop 1604 from San Antonio’s largest shopping area and amusement park. The hotel provides easy access to The Shops at La Cantera®, La Cantera Golf Club, SeaWorld, Six Flags Fiesta Texas, the riverwalk, and the Alamo. Bring the whole family to enjoy Alamo City!

Be sure to mark your calendar to attend these important planning meetings. All IBBA members are welcome to attend. Contact the IBBA office at 210-696-8231 or visit www.GoBrangus.com for more information.

Download registration form: Return to Brittni Drennan via email or fax to 210-696-8718 by Friday, September 26.

Registration List (updated 9/29): See who is coming to the Brangus Fall Conference. 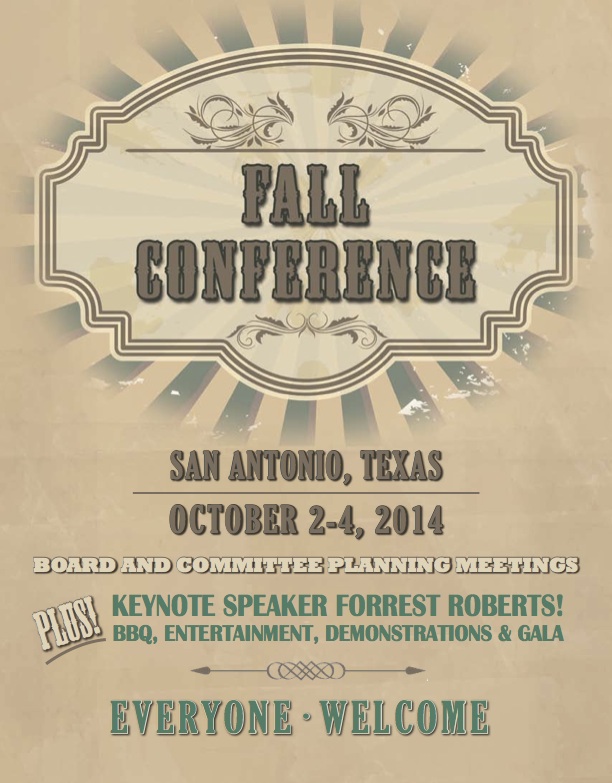 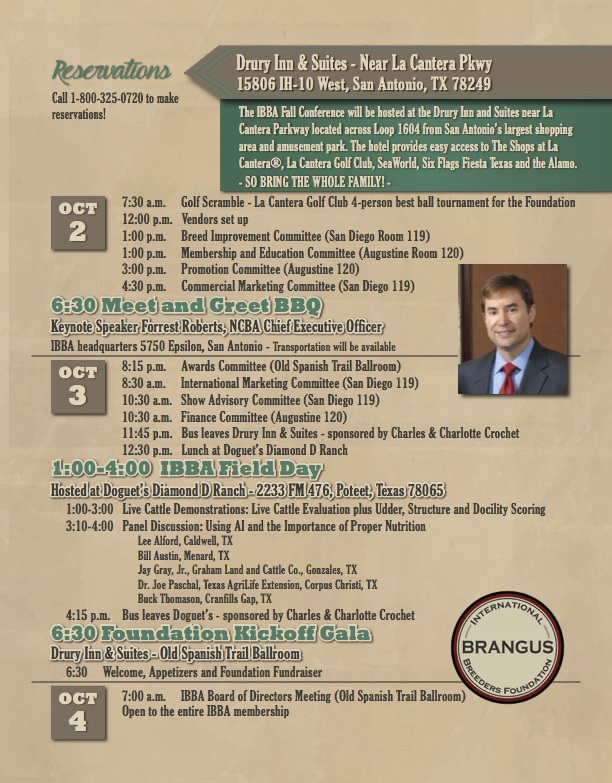 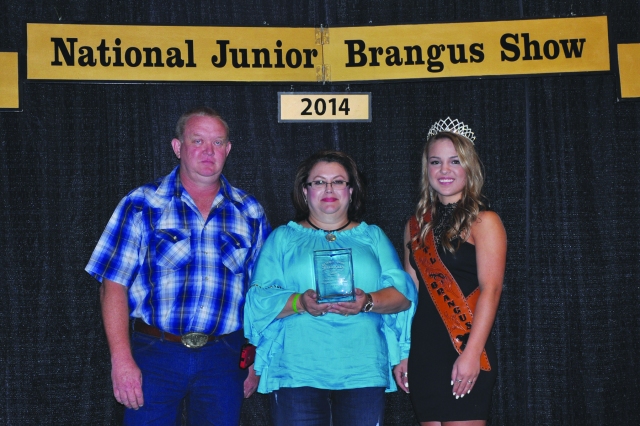 Veronica Munoz of Pearland, Texas, was presented the Georganne Myers National Supporter of the Year Award for her unwavering support and dedication to the International Junior Brangus Breeders Association (IJBBA). Munoz was honored at the IJBBA banquet Friday, July 25, 2014, hosted in conjunction with the National Junior Brangus Show (NJBS) in Bryan, Texas. Past recipient of the award Ray Smith of Arkadelphia, Ark., made the presentation.

A deserving leader is selected annually by a committee based on the tremendous support shown for the junior members involved in the Brangus breed and contributions made to ensure the success of the IJBBA.

This award, given in memory of Georganne Myers, is a representation of the passion and devotion that is still very evident in the people involved in the Brangus breed. Georganne raised two daughters who both were actively involved in the Brangus breed, Rachel Myers Childs and Britne Myers. She lived in Liberty, Texas, and passed away after being diagnosed with brain cancer.

“This award meant more to me than any other award because I knew Georganne and know what the award means,” said the 2012 award recipient, Steve Densmore. Densmore is the ranch manager at Circle X Land and Cattle Co. in Bryan, Texas, and is an IJBBA Advisor.

“Georganne was a Texas Junior Advisor and accomplished a lot for the IJBBA,” said Ginger Pritchard, a Junior Advisor and strong supporter of the IJBBA. “She organized events, helped with fundraising, and she was always upbeat, positive and enthusiastic about the future of the junior program.”

Munoz follows Georganne with her fire and passion for the IJBBA. Now in her second term as an IJBBA Advisor, Munoz has been a solid part of the IJBBA Advisory Committee, providing continuous support and assurance to the IJBBA Board of Directors. For the past four years, Munoz has volunteered to organize the arena and banquet decorations.

“Every year, she asks what her budget is. After that, I never have to worry about any aspect related to decorations for NJBS,” IBBA Director of Youth Programs, Tyler Dean said. “And better yet, 99 percent of the time she comes in under budget because she makes everything by hand! When looking back over the list of past recipients of this award, it reads as a “who’s-who” of the mentors of the association, and I feel the group of past winners are iconic figures in the Junior association. Veronica Munoz is the perfect addition to the list.”

Of 165 animals entered in the 2014 Brangus Futurity, six were named Grand Champions at the Brazos County Expo in Bryan, Texas, by Judge Blake Bloomberg of Stillwater, Okla. A native of Berwick, Ill., Bloomberg is currently an assistant professor and livestock judging team coach at Oklahoma State University in Stillwater, Okla. Prior to joining the faculty at Oklahoma State, Bloomberg coached the Texas A&M University livestock judging team and was named the National Collegiate Coaches Association’s Coach of the Year in 2008 and 2009. Additionally, he was a member of the 2004-2005 National Champion A&M Team that went undefeated. Bloomberg also has an extensive background in the cattle business and grew up exhibiting Simmental, Hereford, Angus and Shorthorn cattle.

Wednesday, July 23, 2014, at the Brazos County Expo in Bryan, Texas, Judge Jirl Buck of Madill, Okla., evaluated a stout lineup of cattle. Growing up on a Limousin ranch, Buck grew up in 4-H and FFA showing steers and heifers. After working with several top cattle producers through college, he began buying and selling club calves. In 1989 he put together an elite set of Maine-Anjou females which served as the cornerstone of his program. Today, Buck Cattle Company raises Maine-Anjou, Maine-Tainer and Hereford cattle. Buck strongly believes in the value of the junior livestock program, and he has spent the better part of the past two decades in the barns at junior livestock shows helping his daughter and his customers exhibit their animals.

The day began with the Champion’s Challenge, which is designed as a show-back opportunity for the previous year’s “Source of Champions” (SOC) Sale heifers with added prize money. Consigners put up $100 per heifer for the SOC Sale, and that money goes into the pot for the challenge. In 2013 nine heifers sold, so this year’s challenge had $900 in added premiums. Five of the heifers sold in the 2013 SOC Sale made it back for the challenge show. Rising to the top was TCR Miss Maggie 1252A, a January 2013 daughter of DDD Black Gold 853W2. She was consigned to the 2013 SOC Sale by Triple Crown Ranch of Angleton, Texas, and is owned and exhibited by Dalton McKee, Tatum, Texas. Jackson Family Brangus of Waco, Texas, sold the Reserve Champion, Ms CJ Brynna, who is now owned and exhibited by Emily Lettelier from Citra, Fla. The September 2012 female is a daughter of Mr EJ Laredo.

For more information about NJBS and the junior association, visit junior.gobrangus.com.

More than 100 junior Brangus exhibitors traveled up to 1,100 miles one-way to attend this year’s 32nd Annual National Junior Brangus Show (NJBS) in Bryan, Texas. In total, exhibitors from nine states brought 186 entries before Judge Reggie Rodriguez of Cat Springs, Texas, for evaluation. Rodriguez is active in the daily operations of Ken Ramsey Brahmans and works as an animal pharmaceutical sales manager for Nelson Wholesale. Additionally, he owns a semen and embryo marketing company and is active in the Texas Animal Health Commission, the Texas Beef Council and serves on the Livestock Committee for the Houston Livestock Show and Rodeo. After breeding and exhibiting numerous National and International Champion Brahman, Hereford and Simbrah cattle as well as judging across the county, Rodriguez brought a wealth of experience as he placed 147 females, five cow-calf pairs and 34 bulls.

Rounding out the day was the crowning of the owned bull champions. RBM King of Hearts, a March 2012 son of DDD Out Cross 1234X, rose to the top to claim Grand Champion Bull honors after first winning the Senior Bull Division. The bull is owned and exhibited by Clint Faul of Rayne, La. The Yearling Bull Champion RG Onstar 99A3 was slapped as Reserve Grand Champion Owned Bull. The March 2013 bull is a son of MC Onstar 924W4 and was exhibited by Reid Janish of Bellville, Texas. In the Red Brangus Bull Show, Trio’s Aristotle 175A claimed the titles of Red Bull Calf Champion and Grand Champion Red Brangus Bull. Morgan Maxwell of Springtown, Texas, exhibited the September 2013 son of Trio’s Yucatan 175Y. Blair Tomlinson of Columbus, Texas, led the final Champion of the day to claim Reserve Grand Red Bull with TX Chief Advantage 76/A. The March 2013 bull is a son of CX Mr Chief Advantage 49/T and first won the Red Yearling Bull Division.

For more information about NJBS and the junior association, visit junior.gobrangus.com.