SAN ANTONIO, TX- The International Brangus Breeders Association (IBBA) has selected GeneSeek, a division of Neogen Corporation, as the association’s new genomics profiling provider. The partnership will allow Brangus breeders to submit DNA samples to GeneSeek for parentage determination and lay a foundation for Genomic-Enhanced EPDs for the breed association.

Samples will be tested with the GeneSeek®Genomic Profiler™ GGP HD 80K and the GeneSeek®Genomic Profiler™ GGP LD 30K for eventual incorporation into genomic-enhanced EPDs for the Brangus breed. The GGP 80K is finding a role as a premium genomic profiler, while the GGP LD 30K is a highly accurate, affordable option for routine testing of herd bulls and other seedstock.

The arrangement allows Brangus breeders to request parentage as either a stand-alone SNP test or as part of their GGP HD 80K or GGP LD 30K results. Both profilers provide parentage verification along with a wealth of information on animal potential. Testing turn-around time is dependent on the type of testing requested.

Brangus breeders should be pleased with the innovative direction they are going, said Ryan Ruppert, National Sales Director for Neogen GeneSeek.

“Profiling is a much faster and affordable way to learn about the merit of bull calves. The profiles also help you confidently represent your seedstock at shows and sales,” Ruppert said. “Plus, a genomic profile on a bull calf or yearling may identify a potential A.I. sire, so if you are fortunate to experience this you can retain and showcase that animal.”

Genomics will have a growing impact on seedstock and commercial cow-calf operations, due to bottom-line benefits that matter to producers, he said.

Some “lowly heritable” traits have a big impact on a rancher’s bottom line. An example is reproductive performance. This is partly inherited and is also affected by management and nutrition. Knowing more about maternal traits of seedstock bulls helps ranchers buy the right young bulls and then select and invest in heifers that will breed and calve efficiently. Using genomic profiles, seedstock producers can measure maternal traits in young bulls and market them on that basis.

“Genomics helps you get the advantage of reliable EPDs without having to do years of progeny testing,” Ruppert said.

While maternal traits help ranchers raise great mother cows, in other cases the seedstock operators’ customers are looking for terminal bulls that will pass along growth efficiency. Genomic profiles also predict performance factors for feed efficiency and feed conversion, as well as carcass quality and composition. The information puts added power in the hands of seedstock breeders and their customers.

When IBBA members order tests from GeneSeek, results will be emailed or mailed. Contact Rosanne Sralla, IBBA Registry Specialist, by email or at 210-696-8231 with questions. For more information, visit www.GoBrangus.com. 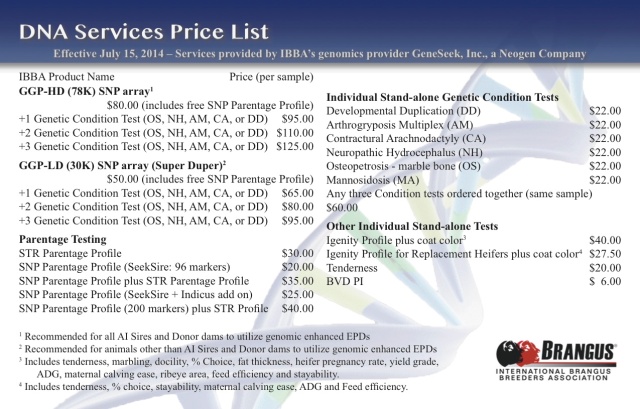 Calving ease (the opposite of calving difficulty or dystocia) is dependent upon several factors. The most obvious factor affecting calving ease is calf birth weight. But, a small heifer can calve without difficulty just as a very large heifer can experience calving difficulty as not only the calf size (as measured through birth weight), but the ratio of the calf size to the size of the pelvic opening is the most critical factor. Calves of the same birth weight may not be shaped the same; broadness of shoulders, degree of muscle expression, length of the calf, etc. may be very different across calves even when birth weight is similar. Calf size, particularly for first-calf heifers, explains most calving problems.

Research conducted over the years has provided much useful information to understand calving difficulty. In the 1970s at the USDA Meat Animal Research Center, the Germplasm Evaluation (GPE) project was initiated to evaluate cattle breeds and sires bred to British females. Dystocia incidence across all sire breeds was reported to be 38.5 percent in two-year-old first-calf heifers, 13.3 percent in three-year-olds, and 7.4 percent in four- and five-year-old cows. Nix et al. (1998) studied 2,191 calving records from the Clemson University Beef Physiology Unit herd (1981-1993) and were analyzed to determine factors affecting malpresentation, mortality and dystocia. Only 20 (0.91 percent) of these calvings involved improper presentation of the calf. Among the 20 malpresentations, 14 were posterior, three were leg deviations, two were head deviations, and one was a breech birth. Overall, 94 percent of the births required no assistance; of the six percent of births that did require assistance, the vast majority was due to calf size. Calf size and female parity explained most of the dystocia.

Over the years, as breed associations recommended their members to collect birth weight records and eventually calculated birth weight EPDs, this provided breeders with tools to aid in reduction of dystocia. Dystocia is an added stress that increases postpartum anestrous, and this can be particularly harmful in first-calf heifers as they take longer to begin cycling after calving than older females even if no dystocia is experienced. Although birth weight EPD is useful in reducing incidences of dystocia, more precise measures of calving ease provide additional tools to breeders.

The Calving Ease Direct (CED) EPD is expressed as a difference in percentage of unassisted births in the birth of progeny from that animal (as when bulls are bred to first-calf heifers), with higher values indicating greater calving ease. Comparison of the CED EPDs between two animals predicts the average difference in calving ease percentage by which the two progeny groups will differ when they are being born. The Calving Ease Maternal (CEM) EPD is expressed as a difference in percentage of unassisted births from daughters of the animal in question, again with a higher value indicating greater calving ease. If two bulls are being compared for CEM EPDs and are bred to heifers, the CEM EPDs will represent differences in expected calving ease percentage among the two sires’ groups of first-calf daughters. It predicts the average ease with which daughters will calve as first-calf heifers when compared to daughters of other animals in the breed.

The table below provides some EPD values on calving ease direct, birth weight and calving ease maternal from the IBBA fall 2012 genetic evaluation. Among active sires, the range in CED EPD goes from -14.2 on the low end to 13.0 at the top, a difference of 27.2 percent calving ease between these extremes with an average CED EPD of +5.2. These values were taken directly from the fall 2012 evaluation on the IBBA web site (except for the fictitious bull OMG ANONYMOUS 4321). The range in CEM EPDs is from -4.0 to 12.4 with an average of +7.2. The range and average for birth weight EPD is also shown.

Use of calving ease EPDs can offer additional tools for Brangus breeders rather than only using birth weight EPD for control of dystocia, particularly in first-calf heifers. Incorporation of Calving Ease Direct EPD into breeding decisions is expected to give increased potential to reduce dystocia over birth weight EPD alone. No matter what location or expected market for calves produced, cattle breeders should always utilize balanced selection that considers reproduction and well as growth and size traits. Any trait or selection tool that provides increased potential for female fertility and calf survival should be economically advantageous.

This article was originally published in the 2012 November/December issue of the Brangus Journal.

SAN ANTONIO, TX [OCT. 22, 2012]– The International Brangus Breeders Association (IBBA) continues to stay on the cutting edge of the latest technology by providing tools for commercial cattlemen to assist in comparing the expected performance of Brangus sired offspring to that of other breeds. These most advanced tools are Calving Ease EPDs, including Calving Ease Direct and Calving Ease Maternal, which take into consideration the weight and shape of the calf, gestation length and breed of the sire.

“In the past we have only had birth weight EPDs which is extremely important when comparing two or more bulls’ calves within a herd or across herds from the stand point of expected birth weight,” said Joseph Massey, Ph.D., IBBA’s Executive Vice President. “But since birth weight is positively correlated with growth, there has been a tendency for producers to believe that bulls with growth potential will also produce heavier calves, therefore increasing calving difficulty.”

Calving Ease Direct and Calving Ease Maternal clearly help to identify sires that produce calves with growth potential and expected calving ease. While the Brangus breed has always been known as an easy calving breed, the Brangus breed has also become a performance-oriented breed, which has caused some producers to believe that Brangus calves would have calving difficulties like other breeds that have experienced this effect.

Massey said the Calving Ease EPDs will be very beneficial in identifying Brangus sires with both growth EPDs and highly desirable calving ease. This will be even more useful to commercial producers that have already discovered Brangus sired calves have excellent growth with little to no calving difficulties.

Calving Ease Direct is a measure of the ease of which a bull’s calves will be born since it is taking into account more than weight, like shape of the calves, and it is well established that Brangus calves have a tendency to be longer and narrower at birth than the British or Continental breeds. While Calving Ease Maternal is equally valuable, it may not be used as much at the commercial level since many, if not most, calves are terminal and most females never have a chance to produce offspring. However, it will have an important role when commercial females are retained for replacement.

As a commercial producer, understanding Calving Ease EPDs and knowing when and how to use them will pay great dividends, especially when selecting easy calving bulls with high performance EPDs. While Calving Ease EPDs have been available within other breeds, it has not been until the multi-breed models have become available that calving ease could be calculated for composite breeds or percentage cattle as recorded by other breed associations.

All commercial producers interested in evaluating Brangus Calving Ease EPDs are encouraged to visit the www.GoBrangus.com website at or call the IBBA office at 210-696-8231 for information on any specific animals of interest. All EPDs are available to anyone for review.